All of the NCLs have two things in common: pathological degenerative changes occur in the central nervous system, and nerve cells accumulate material that is fluorescent when examined under blue or ultraviolet light. Although neurological signs are always present in canine NCL, these signs vary substantially between breeds and can overlap with signs present in other neurological disorders. Until the gene defect responsible for NCL has been identified for a particular breed, a definitive diagnosis can only be made upon microscopic examination of nervous tissues at necropsy.At this time, we offer the DNA test for Lipofuscinoses in the American Bulldog (OFA Test Code LAM), the Golden Retriever (OFA Test Code CL5) and the Tibetan Terrier (OFA Test Code LTT). 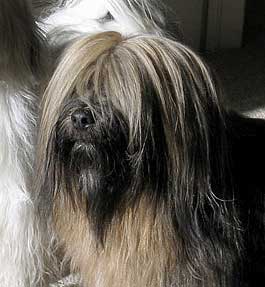 Researchers at the University of Missouri-Columbia College of Veterinary Medicine are working to identify the mutation responsible for NCL in each breed where NCL occurs so that the disease can be diagnosed and carriers can be identified on the basis of a DNA-based test. The first step in identifying potentially affected dogs is for the owner or veterinarian to recognize signs that may be indicative of NCL and bring these dogs to our attention.

Please contact the University of Missouri-Columbia College of Veterinary Medicine if you suspect you may have an affected dog.

Mental changes: Physical symptoms may appear to worsen during times of stress. Affected dogs do not indicate they are in any pain as coordination decreases.

Changes in gait and posture: Initially, uncoordinated movement in the rear is noted. As the disease progresses, affected dogs develop a wide-based stance starting in rear, and eventually involving all four legs. Affected dogs may exhibit muscle twitching, especially when sleeping. The dogs remain well-muscled through the course of the disease.

This neurologic disease becomes apparent at approximately 13 months of age.  Often the first sign of disease is a subtle loss of coordination that is more apparent when the dog is excited.   The extent of the incoordination gradually increases.  The dog may begin pacing or circling when 15 months old and seizures often start before 18 months of age.  Visual impairment and behavioral changes also start at that time.  The neurologic deficiencies slowly but relentlessly increase and affected Golden Retrievers are often euthanized due to deteriorating quality of life when 30-to-35 months old.

Mental changes: A common sign of NCL in Tibetan Terriers is the development of aggressiveness toward people and/or other dogs. Dogs with this disorder often appear nervous or anxious. Changes in eating habits have also been reported. Affected dogs often lose the effects of both behavioral and house training.

Changes in gait and posture: Early in the course of the disease affected dogs exhibit a mildly uncoordinated gait with occasional stumbling and crossing over. The lack of coordination becomes more severe as the disease progresses. Dogs with NCL often have difficulty jumping up onto surfaces from the ground or floor, and in going up or down stairs. In the end stage of the disease, affected dogs fall over often and have difficulty getting back on their feet.

Seizures/convulsions: Mild seizures that are often unrecognized by the owner are common as the disease progresses. Severe seizures do sometimes occur as well.
Information supplied by the University of Missouri-Columbia College of Veterinary Medicine, used by permission.

Tests are ordered online through the secure area of the OFA website. Payment is accepted by credit card (MasterCard and VISA). The OFA administers all order handling. Upon receipt of an order, the OFA will send out the test kit which will include a Foam-Tipped Applicator card for DNA sample collection, along with sample collection instructions. Using the FTA card technology, owners can safely collect DNA samples at home. The collection process is non-invasive, and no veterinary appointment is necessary.

Samples are then sent to the University of Missouri College of Veterinary Medicine where the samples will be processed by the Small Animal Molecular Genetics Lab. Results will be forwarded to the OFA, and the OFA will issue the resulting report to the owner.

The fee for each test includes the test kit, laboratory processing, and subsequent registration in the OFA databases.